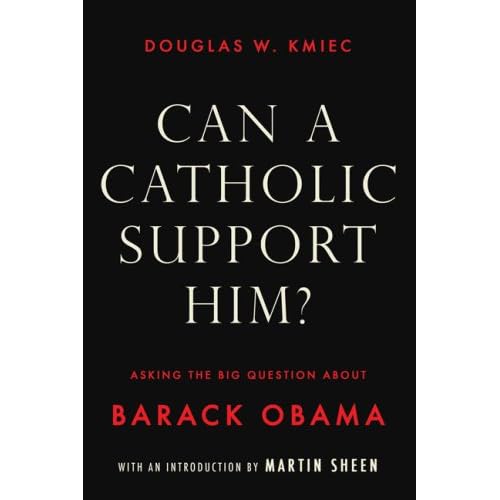 I had been eyeing this book at Kinokuniya for about a month. It was still before his election time. The whole world was for him, and yet, like many other catholics, I felt as though I was betraying my own religion by supporting Barrack, which honsestly didn’t make sense to be honest.

My good friend Atlasya depicted my thoughts well in her recent entry.  To be ostracized as being pro-death and not following the catholic faith just because one supports Obama is preposterous. Although it might be seem as cowardice , I’ve been careful not to be to pro-Obama when it comes to openly discussing such pertinent matters with my Catholic circle.  I’ve heard the arguments from both camps.

And so that’s why I bought this book. If anything, I guess me purchasing this book is an epitome of how serious I am taking my religion and political beliefs. Growing up I was not that strong of a catholic myself. Sure, I’d never skip Sunday Mass, I had a bible by my bedside, I carried my rosary as often as I could and go about my daily endevours (I still do carry it around with me till this day). But I was out of vogue when it came to the Church’s teaching. Perhaps that’s why I supported Kerry blindly, without really scrutinizing his stance on abortion.

With the help of the young adult’s ministry, through their programs and monthly talks, I grew closer in my faith, and I started seeing how wrong my thoughts were, and how the catholic church had gotten it right all along. Pope John Paul II ‘s writings on Theology of the body opened my eyes on how the world had gotten it’s views on sex and abortion wrong.

And so like most of my catholic friends, I began to renounce abortion, and all the other corrupted evils of this world. I began to view those who were impregnated before marriage as being inmoral and having no faith in them. I began viewing such people as living the ways of the world and not being responsible and abstaining from pre-maritial sex.

But I found that thought to be judgemental and very “pharaisee-like”. I wondered whether people who thought that way of others who were involved in a pre-marital sex relationship would think that same way if that person was his younger sister or brother. Too often times we – the “righteous ones who have never been in a compromising situation” sit on a pedestal and judge others. I used to sit on that pedestal and yes I used to be quite judgemental. Like I said before, I naively presumed those who were in a pre-marital sexual union to be irresonspible and not following God’s law.

But I have to admit, my thoughts have changed. Personally while I am still against abortion, I have to learn to accept the choices of others. It’s extremely painful and difficult for me to say this, but I guess I have perhaps come to a point in my life where I can only share with you my own personal views. It’s up to you on what you do next.

It’s funny, many months before Obama nominated Joe Biden to be his running mate, as I was reading Audacity Of Hope  on a train ride back home, I paused to reflect on how I would address the whole abortion issue if I were president-elect. And my thoughts were exactly what Joe Biden would go on to say down the road : I can’t force my belief unto others.

Many people have disagreed with me on that thought of line. Some,  have rebuked me by wondering whether I’m a real catholic. I’ve also been questioned by others on how I can be catholic and yet support a pro-death president.

I feel people are mislead. Supporting Obama does not mean you’re necessarily endorsing a murderer (and that’s what the Republicans and fundamentalist christians (including Catholics!) want you to believe). On the contary, I took great relief when I found this being quoted by our Holy Father, Pope Benedict XVI  (He was then Cardinal) :

A catholic would be guilty of formal cooperation in evil… if he were to deliberately vote on a  candidate precisely because of the candidate’s permissive stance on abortion/euthannasia. When a catholic does not share a candidate’s stand in favour of abortion/euthannasia, but votes for him for other reasons, it is considered remote material cooperation, which can be permitted in the presence of proportionate reasons

I got that quote from just reading a few pages from the book.

Can it be any clearer than that?

So can a catholic support him? … I’m about to find out