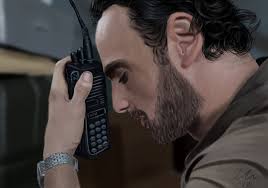 I never ever though in my wildest dreams I would be attracted to a zombie tv-show. The casual observer who follows the hit tv-show will remark that it’s the same thing over and over again – hack and slash zombies, sometimes shoot them. Oh and there’s the drama element which is kinda like survivor-ish, in which major characters form loose alliance in which mistrust, questionable authority and hot-headedness fills the air. Seriously, the show can be quite majorly depressing after a while.

But it’s in the midst of all this, I find the protagonist, Rick Grimes the most realistic leader I have actually ever encountered in all history of tv. Compared to even Jack Shepherd, who I wrote about sometime back, and other key tv-show leaders (Jeff Winger, James T. Kirk, Ned Stark and Harvey Specter come to mind , I find Rick Grimes’ leadership to be far more realistic and moving among all.

There are a number of things that struck me about Rick’s leadership in the Walking Dead. First, Rick takes the high road and he thinks through everything, weighing the pros and cons. Did you ever notice how other characters are quick to make fast-and-easy suggestions like “kill the guy rick” or “lets abandon the search for the kid” or “why bother going into the city to save the dude, it’s a waste!” Even Rick’s own wife (played by the lovely Sarah Wayne Callies!) doubts Rick at times. Is it worth sacrificing your life to save some dude who was a prick to begin with? It’s so easy for Rick to just follow those suggestions, especially the ones that comes from his buddy Shane – and mind you what Shane says is very practical at times – like blowing off the zombies in the barn, or killing the young dude in the compound – and yet Rick still struggles to come to terms with it. And therein, ironically lies the beauty – the struggle to do the right thing even though the practical thing may be the best way to go.  I love Rick and I can relate so much to his burden – the cross that he carries in ensuring the safety of the group and at the same time doing what is right – making the choices and standing by them.

The second thing I observed about Rick is the accountability. None of the main characters assumes a greater accountability then Rick. Not dale, not Lori, not Shane, not even Hershel or Daryl.

Sure everyone pitches in to help, but it’s always Rick’s call at the end of the day. Like in the first season where Rick tries to lead everyone to the CDC only to find it’s closed and locked up and immediately you have people accusing Rick of wasting the effort of coming all the way to the CDC only to find themselves surrounded by the zombies. Through the many choices Rick makes throughout the episode, you can see that his accountability grows heavier by every decision and we see Rick’s vulnerability when he looks at the Crucifix in the baptist church and asks Christ for a sign, some glimmer of hope.

The 3rd is Rick’s own doubt as a leader – After numerous decisions that Rick makes throughout the show which ultimately failed, people grow resentful of him. Think of Carol and how in a non-verbal way accused Rick of being careless in not taking care of her daughter in the woods when all Rick was trying to do was lure the zombies away so that Sophia would be safe. Or when he made the call to use the group’s effort to run a search rescue effort to find Sophia or the dude in the city (that was left behind) which was met with a lack of support from Shane and others. Perhaps one can say that it was Rick’s pride that forced him to make those decisions – after all he is a deputy sheriff and its his responsibility and duty to ensure the safety of civilian life – but I beg to differ – I don’t think it was a matter of pride, not for someone like Rick – despite some of the characters accusing him of going on an ego trip – Rick knew that was the right thing to do knowing full well he won’t get popular support. And we this “right mentality” taking a brutal hit as his decisions prove to be poor (through no fault of his own) and he starts doubting himself as a leader. That often happens when people start losing confidence in you and hence that’s why Lori the wife lashes out at the group in Rick’s absence for putting the toll and burden on Rick and making it look like it’s his fault for all the bad things that are going on. People love a scapegoat at the end of the day.

In my own life, especially in recent times, I can relate a lot to Rick and to those points above. As a leader in my own society in which I am a member of, I have experienced all those things that are listed above. People look to me for answers, and for direction. People hold me accountable for their responsibilities and I know this sounds oxymoronic but the more I learn about life and leadership, the more I realise this to be true and The Walking Dead just proves this (Remember how Daryl gets injured badly while searching for Sophia and Shane pins the blame to Rick for still continuing the search and Rick has to endure the harsh comments?). And just like Rick, I find myself holding back – taking a step back, although sometimes I just lose it and have to speak my mind (now there’s something I can learn from Mr. Grimes!) but over time I am slowly beginning to realise that as a leader, these are things that a leader needs to endure. It does not mean weak leadership, but it’s something that just needs to be accepted as part of leading a group.

I too often get bombarded with decisions and I have to weigh things through. Although in the past some have accused me of “not letting them in the decision” I know that in reality there is no such thing. A leader will be accountable period. 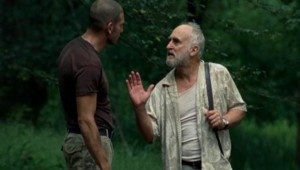 There is no such thing as letting people in the decision – sure you can consult them and share with them your plans, but ultimately you as a leader make a decision and people just follow. And because of that, there is a consequence – your followers become resentful. With some exception of Dale, Lori and T-Dog, everyone else at some point of the show questioned Rick’s decisions and some were vehemently against it, thus further fracturing the group unknowingly. And I love it (I actually clapped at that scene) at how Rick confronts Shane and tells him off – “If you are going to stay with us, you need to listen to me and I will make the calls, not you!” . And for me, that’s important. I am ashamed to say that I have been on the other side of the fence before during my younger days as a junior leader in which I questioned my leader’s authority but as I wise up, I realise how foolish I was back then (since then I have actually made an effort to apologise to those leaders and mend the relationships back).

And finally, with the heaviness of the burden that you carry as a leader, you start doubting yourself – I mean who wouldn’t? With your decisions not panning out, with people doubting your decisions, with people growing resentful, it’s normal for any leader to lose confidence and start doubting – In my own life I have seen myself fall into this doubting despair and it gets lonely, just as how it felt for Rick at times. I have found myself also staring at the crucifix or just wandering in my thoughts as I take a walk to ask God to show me a sign that I am on the right path or ruminating where I screwed up!

That’s why I laugh and just shake my head whenever I hear such accusations about my leadership style – that I am brash, or not in for the people, or I am always “away” – Rick too got those same comments (Why do you need to sacrifice yourself for others?! We need you in the camp more than running around and minding “other people’s business”?). I used to be upset earlier on in my leadership role whenever I hear such comments because I thought I was a failure – but these days it’s just amusing.

Why is it amusing? Because leadership is a precious gift and often dare I say misunderstood and abused treasure. Rick Grimes is able to do something that no one can do – Not even Shane who insists and boasts that  he can do a better job of protecting the group. The wise Dale could see through Shane’s character and deemed him to be a phoney and that proves a point. We often want the gutsy, the macho, the guy who can take the shotgun and go kill all the zombies and save the day when in reality leadership is more than that. Leadership calls for maturity, it calls for judgement and level-headedness which sometimes I lack in although I am trying by the day. Leadership calls for wisdom, it calls for courage and most importantly, above all else, it calls for perseverance. And to possess all five “leadership virtues” and lead a team is a true gift. In my own years, I have learnt to appreciate these virtues from those who have shaped my own life, be it at work or in other areas. People may complain and doubt Rick’s effectiveness, but at the end of the day, that’s what makes a leader and this is something we can all learn in our own lives.

Oh and another thing…Rick actually did whine and complain about being a leader. He knew what he had to do and he just did it – despite the burden he involuntarily had to carry and assume. That’s why I am amused whenever major characters in the tv-show accuses Rick – Who made you the leader huh?” – Err..duh it was you!