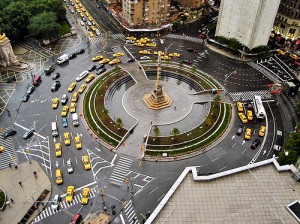 While Day 2 started probably better than Day 1, it sorta almost ended in utter tragedy before some final redeeming hours toward the tail end of the night. We started the day at around 10 am heading out to get coffee first followed by a 1-hour commute to Columbus Avenue. It was nice to walk by Central Park although the weather was a little moody in the morning with the dark skies looming across the skies. We finally reached Columbus to join my brother’s friend for lunch. It was nice meeting up with his family and also my brother’s other friends who were all invited for a sorta mini reunion. We went out to Landmarc and had a good brunch/lunch with the friends.

Soon after lunch (which ended at around 3.00 pm) we both decided to walk up to the Museum of Natural History but alas halfway during the supposed 20-minute walk from Columbus Circle to AMNH it started to rain and here’s the thing about the rain over here – it isn’t so much like back at home where it rains heavily for a good 15 minutes and then you’re done – the rain we experienced yesterday started out rather gently but never quit. It continued to rain slightly more heavily and we decided to take the train straight to AMNH halfway through the walk.

It was nice being in AMNH – the Rosa Space and Earth Center was interesting albeit a little too basic for those who have already done some additional reading in astronomy and the cosmos. I found it to be decent, but not overtly exciting overall. We didn’t have much time to spend in AMNH although I do think it warrants a 1-2 full day visit just on its own and although we were rushed (the place closes at 5.45pm) I personally felt that the museum is pretty good and we probably would have only seen around 25% of the total exhibitions.

Walk till you drop

As we made our way back down Columbus Ave, my legs started to kill. It had resumed raining just after we had got out – what amazing luck right?! But making the trip down was just starting to get tiring as we made our way to the nearest substation to go to Battery Plaza and visit Big bro’s friend whom we met for lunch earlier. We finally got to the Columbus train station and took a train down south to Battery Plaza where we reconvened with the guys we met for lunch earlier that day. Battery Plaza is a really upper class nice neighbourhood.

Changing Lanes Can be unforgiving

As we were heading back to Brooklyn after spending some time at Big bro’s friend’s loft, we got confused with the train lines and what should have taken a 1-hour journey back home ended being 2 hours and 40 minutes. As I mentioned in my previous entry, the lines in NYC are pretty bad in general. Sure, over time one does get used to it and learn the lines, but all in all, I find the lines utterly confusing and not really people friendly and the evidence of that was yesterday night. It reminded me of how my early days in KL was where the roads in KL can be unforgiving if you make a mistake by missing a turn or failing to keep on a certain lane on the road. Also, it was during those moments it made me realize how much I miss my car and driving around. Commuting can be a real pain and you waste alot of precious time for the wait, the ride and the walk.

Final thoughts of the day

All in all, yesterday’s trip was alright. As my cousin remarked last night, “In NYC you need to know where you want to go” and I found that to be true. I gotta admit, among all my trips I have been, this trip has been the most poorly planned and disorganized. Not to say its a bad thing, but I did realize the consequences of our poor planning – just “going with the flow” does not work in a city where distance and time matters. I found myself being upset at times at being unable to figure things out and without a 3G connection, adventures in NYC can really turn into a hair-pulling frustrating nightmare. By the time we got home last night it was close to 11pm. Tired and hungry our only saving grace that night was being able to look at the Manhattan skyline although I couldn’t appreciate it as much as I would have wanted to simply due to the day’s tiredness

Meeting the boys2friends over lunch and in the evening was alright – I wouldn’t say I was all thrilled and psyched about it. It was interesting to listen to their life and their remarks. I am sure Big bro would have felt more than me as they were mostly his peers and seeing them cradle their babies and play with their kids would have affected him in some way. I know it would have affected me. But at the same time it also got me thinking about my own life back at home ; how much I have come up and the achievements I have made. During those train rides, those thoughts filled my mind – not because I wanted to feel abit of an ego push for myself and justify my self worth but the fact is really true. That is my reality. Sure I could have always looked at the boys2friends with envy and ambition and get all psyched up and pursue the american dream, but somehow I didn’t feel that way.

As we discussed toward dinner last night, the topic of conversation was like in America you can do what you want and how you choose. Just as how in NYC you gotta know what you want, its the same in life. What do you want in life? Some people want the good life, others want the more ambitious power-drive life. To me, as I look back in my career, I want to live a measured life at the end of the day. What is a measured life? Well to me, a measured life is one in which I feel not so much happy …but rather a life of contentment. I want to live in the present while keeping my eye focus on the future. As Big bro was walking along with my cousin last night and I was trailing a few steps away pondering as I walked, it got me thinking that while I may not be as calculative or “life-smart” as others, I do believe in God – not because I am being fatalistic or anything, but rather I want to trust Him and invite Him to be part of my future plans. Perhaps God does have a plan for me in this trip and its trickling in one thought at a time – like yesterday where at the end of the day I resolved to once-again renew my commitment in allowing God to actively shape my future while I actively participate in my future.