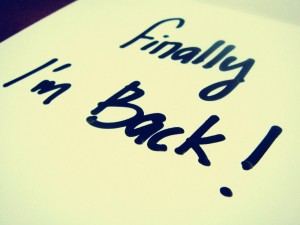 It’s been a long time, yes far too long, Its been a very long time since I last blogged. Well actually that’s not entirely all true! I have been blogging over the last few months, but these thoughts, these entries of mine have been kept safely in my Evernote documents. Yes, I have been writing, just not on this blog. Nevertheless I have returned – back to my official writing pad.

Much has changed over the course of the last 7-8 months since my last entry. I am now in a strange land (well not so strange as Singapore was once upon a time part of Malaya), with a new job (all not so new either as I am in a job which I had build almost all of my career in over the last 10 years) and I am married (yes, this you can say is very new to me!) . Yes among all the chaos of newness that has entered and somewhat taken over my life, being married to someone whom I am learning each day to love more and more each day has probably become the biggest news for this year.

From starting with our courtship back in October 2014 as friends, to becoming engaged in 2016 in the midst of our parents as our witnesses to finally tying the knot in October and running off to the Laplands of the the arctic circle in Finland in November (and meeting the Pope in Rome during our sposi novel) much has happened in 2016.

After all all the uncertainty that plagued our future earlier this year (whether I would be able to get a job in singapore and start life together in Singapore as a married couple) i finally landed a job by a miraculous act of God in July and started work a month later in August. In September we finally moved to our new abode which is a Condo not too far from the fiancee (now spouse!)’s parents home. The reason for the condo was not to do with seeking earthly comforts of pleasure but rather it was a practical move as I was preparing to move Drew (yes, Drew my lovable 4-year old labrador who taught me a thing or two about life!) down to Singapore with me as well. Renting a condo (private residence) seemed to me the most logical sense.  With the help of Phoebe’s friend from Church we managed to secure an awesome abode (You can view the video of my “grand tour” of mi case over here)

Life in Singapore has been a challenge I will be honest to admit. Even though geographically speaking its so near and there are many cultural similarities between my homeland and the little red dot, I found myself overwhelmed during the first few months of my life here especially as I tried to juggle my work responsibilities while adapting myself to the new surroundings. But day by day, from relying on public transports to learning where to get good affordable food and asking my wife for help on getting around its been a journey for me as I try to grapple and adapt. One important lesson I learnt from the get go was that having a smartphone really helps! As much as I loved my old faithful Blackberry Passport, I literally had to get a new SmartPhone in order to download the necessary SG Apps required to help me get around the city.

I did mentioned earlier on that I have been actually blogging during those missing periods which were not captured in this blog. Yes I do plan to publish those notes which I captured during that period from May – August into this blog. That’s actually my next step on part of my blog restoration process. From last count I recall I had roughly captured around 6-9 notes during that period  – some full blown proper entries which are “ready to publish” and others are just notes which do require some “additional touchup”. In any case the original plan was to actually upload these “lost entries” during the honeymoon period but alas I didn’t get around it back then – was too busy recuperating from the hectic work schedule that had kept me stressed during the whole month of October and on top of that being just married.

In any case the “lost” notes will be published eventually (targeting to do it before Jan 1st 2017!)

More updates to come and I hope to keep writing more regularly in 2017.