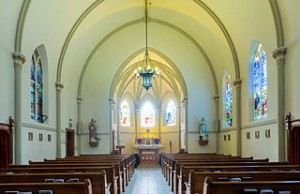 It was October 4th 2005. I was in my final semester of my final year. It would just be another 3 months before I would finally graduate from college and move on into the “real world”. October 4th 2005 will always mark a special day in the history of my life. I woke up that day, receiving the customary calls from my parents, like how they had done the last 2 years before ; wishing their youngest boy happy birthday and telling him to study hard and make sure he goes to church and spend some time in prayer before starting his day. October 4th 2005 was special though. Apart from being my last final semester, it was also close to my midterm exams. So naturally I got up and made my way to the Rosary Chapel of Our Lady of Assumption to fulfil my birthday obligation. I can’t remember exactly what I prayed but I do remember sitting at the last pew and mumbling something. Pretty soon, I was on my way to start my day, with class that morning followed by revision in the mid afternoon. My next class would only be at 7pm. Plenty of time to revise and prepare for the day.

My usual abode was always the Leddy Library. It had been my “tower of refuge” during my years as a student. I would often go up to the 3rd floors where it was nice and quiet and also secluded to begin studying. It was that day somewhere around 1pm that I decided to head down to the computer terminals to take a break from studying and check my emails. Out of the blue a friend of mine approached me and had asked to borrow my cellphone. I naturally obliged and continued surfing the net for another couple more minutes before heading up to continue studying.

It was only after a while I had realised I had lost my phone. Panic, I found my friend and asked him if he had my phone, he said he had returned it back to me. I returned back to the computer terminals only to find it wasn’t there. Then I approached the librarian to ask if anyone had surrendered a lost cellphone to the lost and found counter. She told me no, no one had done so. I was upset.  Then I thought why not call my phone from the payphone? And so I did and it began to ring!!…and it continued ringing and then my heart began to feel uneasy…I realized that I had set my phone to silent as I was in the library. So even if it was ringing, no one would hear it and be able to pick it up. The thief would be happily stashing it in his pocket without anyone realizing he was carrying MY stolen phone.

I was devastated. I had no mood to study all that afternoon. I remember sending an email to my mom to let her know I lost my phone and making preparations to borrow a spare phone from a friend of mine. How could this be happening on my birthday? Of all days today? Seriously? I was contemplating all this just outside my library near the common parking lot just opposite the student centre. Then something came over me and told me to go and pray. And so I returned back to Rosary chapel and this time, instead of sitting right behind (where I usually took my seat) I decided to sit right in front of the blessed sacrament. This was was my first time ever being so close to the tabernacle and I just prayed. This was probably the first time I prayed with all ernest and I just asked God to help me find my phone if possible. Strangely after that I was calm and at peace and I was even able to go for my 7pm class despite the worries that had plagued me during the day. I could even concentrate at class! Class was over at about 9.30 pm and I remember walking back from Memorial Hall (where my class was at) and as I was passing by something prompted me to go back to library and just try dealing my phone. I did so and the phone rang but once again no one picked up. Then that same prompt told me to check with the librarian on duty which I duly did. And I remember she looked at me rather queerly, and instead of going to the Lost and found bin, she went to a drawer and pulled it out and asked “is this your phone?”  I was overjoyed. My cellphone, which my mom had given me the summer before was found! It even had a text message from my mother saying along the lines – “this is my son’s cellphone. His name is so-so and he lives in this address, please return it to him if you have found it” I remember replying that text message saying “rejoice and be glad mum, your son has found his phone!”

That night I remember staying up in my room, pondering on the day’s events. Who was this God of mine whom I had been worshipping for the last 22 years? Had he actually done a miracle in my life? And on my birthday? I remember as I was ruminating through these thoughts and sharing them with my best friend James (who was also my housemate), a voice came and said “if I can do something like this for you, what more can I do in your life?” . That was the day I had my Saul moment. That was the day I fell off my donkey and I was blinded by this God. I remember spending the next few days in prayer and reflection, taking walks by the riverside and I decided I wanted to get to know who this God was. On my final semester, as I was on the verge of completing my studies, God decided to show himself to me. That was the greatest birthday gift ever. I got a birthday card invite from God.

10 years on, that experience still resonates close to my heart. I often share that story with people of the same faith whenever they ask me how I got to know God or why I decided to serve. Today, God is still working wonders in my life. He has not only blessed me with a great job and career, but also good health and a good future spouse. He is still teaching me, reminding me patiently to trust in Him when all else fails. And through the 10 years He has given more than anything I could ask for, exceeded my expectations beyond words and has been faithful since the day he told me those words – “…what more can I do in your life?”

NOTE : The image above is a picture of the interior of the Rosary Chapel…where I first encountered God. I was down on my knees on one of those first pews in that picture, just 1 or 2 rows in front of the blessed sacrament.